Project A6 introduced the combination of microgels and DNA, which leads to a novel hybrid system with two independent thermoresponsive features. On the one hand the VPT of the microgel which can be tailored by the microgel composition, on the other hand the reversible melting of DNA double strands which can be programmed by the base number and sequence. Both features of the hybrid system can be controlled independently of each other. DNA functionalized microgels provide a reversible binding motive for complementary DNA strands which can carry any kind of molecular load, ranging from individual molecules, such as dyes, to nanosized objects, such as gold nanoparticles. The hybrid system was analyzed via 3D superresolution fluorescence microscopy (project A6), which visualized the DNA binding sites and as well as the uptake and release upon thermal stimulation. TEM tomography, performed in project G1, enabled to visualize the penetration depth of DNA functionalized gold nanoparticles inside the microgels.

These two independent thermal features combined with the high biocompatibility, the swellability and the permeability of the microgel make this system promising for potential biological applications, such as the reversible uptake and release e.g. of DNA-bearing bioactive compounds. 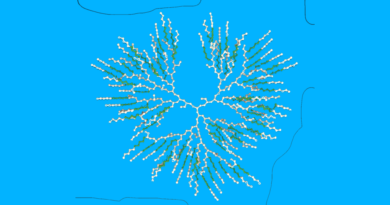 SFB 985 on the cover of Applied Materials & Interfaces

SFB 985 on the inside back cover of Dalton Transactions

SFB 985 organizes the next virtual symposium on microgels