Solid–liquid interfaces play an important role for functional devices. Hence, a detailed understanding of the interaction of soft matter objects with solid supports and of the often concomitant structural deformations is of great importance. We address this topic in a combined experimental and simulation approach. We investigated thermoresponsive poly(N-isopropylmethacrylamide) microgels (μGs) at different surfaces in an aqueous environment. As super-resolution fluorescence imaging method, three-dimensional direct stochastical optical reconstruction microscopy (dSTORM) allowed for visualizing μGs in their three-dimensional (3D) shape, for example, in a “fried-egg” conformation depending on the hydrophilicity of the surface (strength of adsorption). The 3D shape, as defined by point clouds obtained from single-molecule localizations, was analyzed. A new fitting algorithm yielded an isosurface of constant density which defines the deformation of μGs at the different surfaces. The presented methodology quantifies deformation of objects with fuzzy surfaces and allows for comparison of their structures, whereby it is completely independent from the data acquisition method. Finally, the experimental data are complemented with mesoscopic computer simulations in order to (i) rationalize the experimental results and (ii) to track the evolution of the shape with changing surface hydrophilicity; a good correlation of the shapes obtained experimentally and with computer simulations was found. 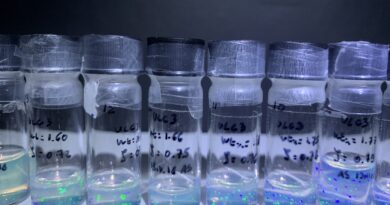 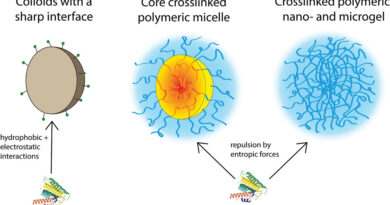